“The bond between The Pearl Harts existed before they had even played together. Meeting on the road whilst playing in other bands, Kirsty and Sara ran away from their previous lives and now describe themselves as outlaws.

Born out of love and a desire of heavier music they burst onto the scene with a stunningly filmed live track and accompanying video, ‘Black Blood’ immediately picking up fans from NME, Clash and BBC Introducing.

The band quickly made a name for themselves with their wild attitude, DIY spirit and incredible live shows. Their raw energy and intense delivery has won them fans across the UK and Europe and seen them as an in-demand warm up act for musical giants such as Garbage, The Kills and Skunk Anansie. As one live reviewer put it:

The bands’ debut LP ‘Glitter and Spit’ released in 2018 has picked up rave reviews and has been described as ‘Full of attitude, charisma and confidence – it takes the listener on an adrenaline-charged ride.’

For fans of: The Kills, Slaves, Idles, QOTSA, Brody Dalle, 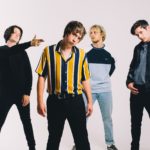 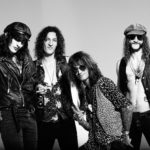