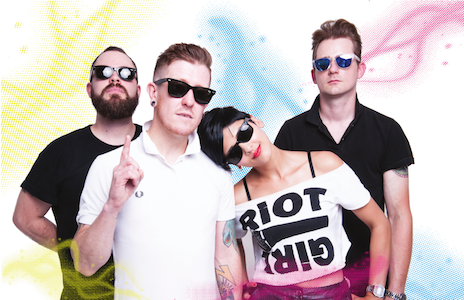 Sonic Boom Six is an explosive and outspoken five-piece described as “taking ska, pop, grime, dubstep, punk and metal apart, then rebuilding them as a hyperactive hybrid” (Kerrang! Magazine). With a live show infamous for “clashing activism and good times”, SB6’s legendary gigs are a party that started in Manchester, UK, with an open-door policy towards all races, genders, ages and orientations. The Boom’s influences include The Specials, The Streets, and The Fugees.

Sonic Boom Six has released 5 studio albums and three full-length compilations with countless singles, EPs and compilation appearances. SB6 has performed headline tours of Europe and Japan as well as slots at festivals including Glastonbury, Download, Sonisphere, the main stage at Reading and Leeds Festival and the whole of the Vans Warped Tour in 2017. Sonic Boom Six has written and performed songs that have appeared on BBC Radio 1, Channel 4, BBC 2 (TV), Rock Band and Sims 3 video games and much more.

For fans of: The Skints, Skindred, Random Hand, No Doubt, King Prawn